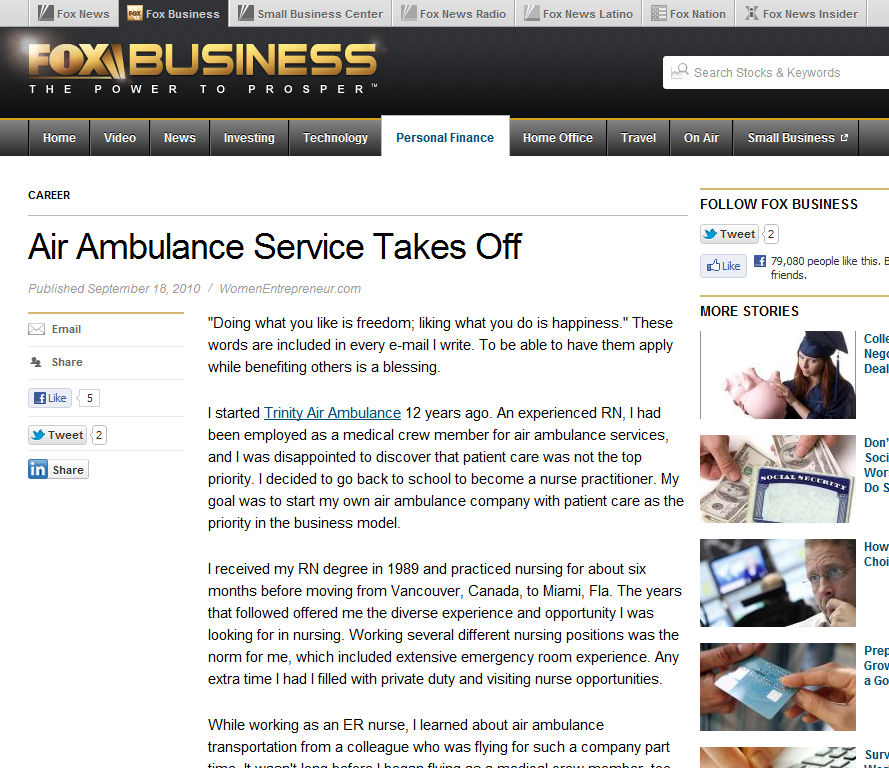 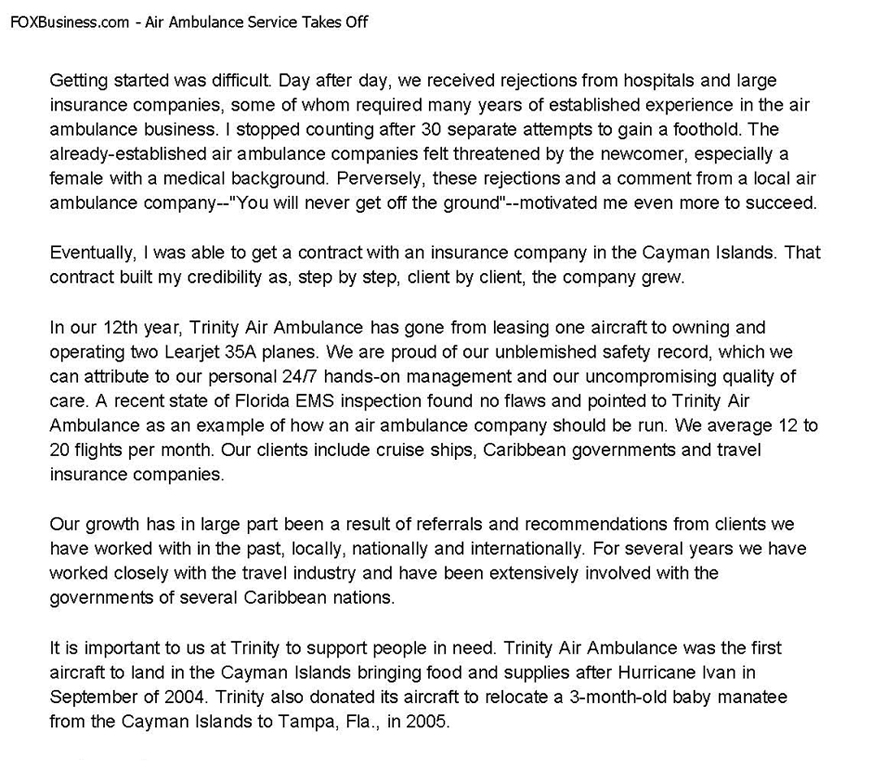 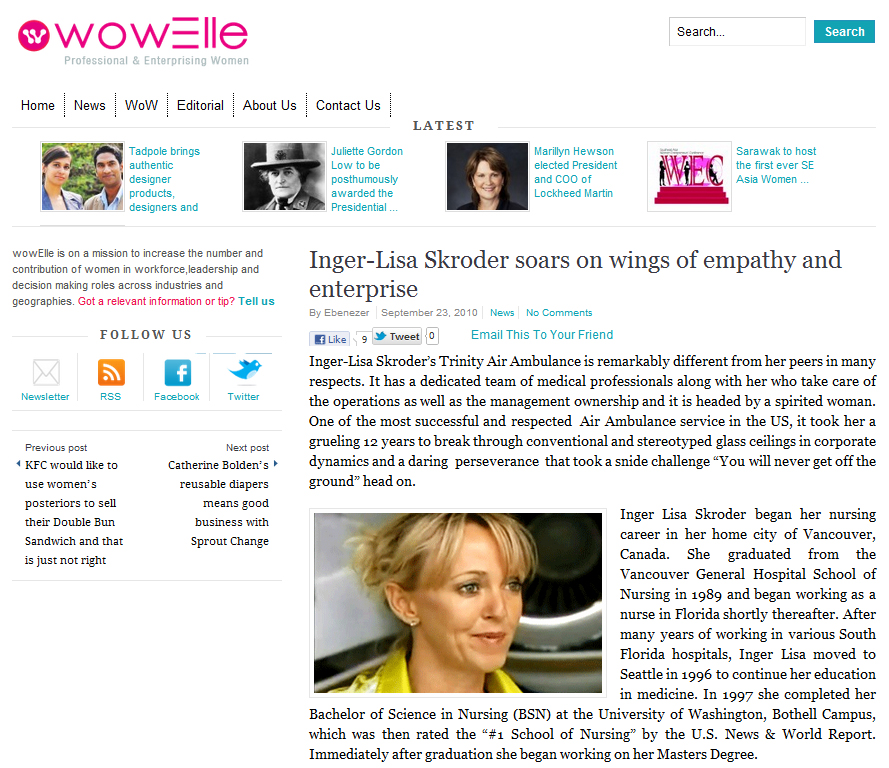 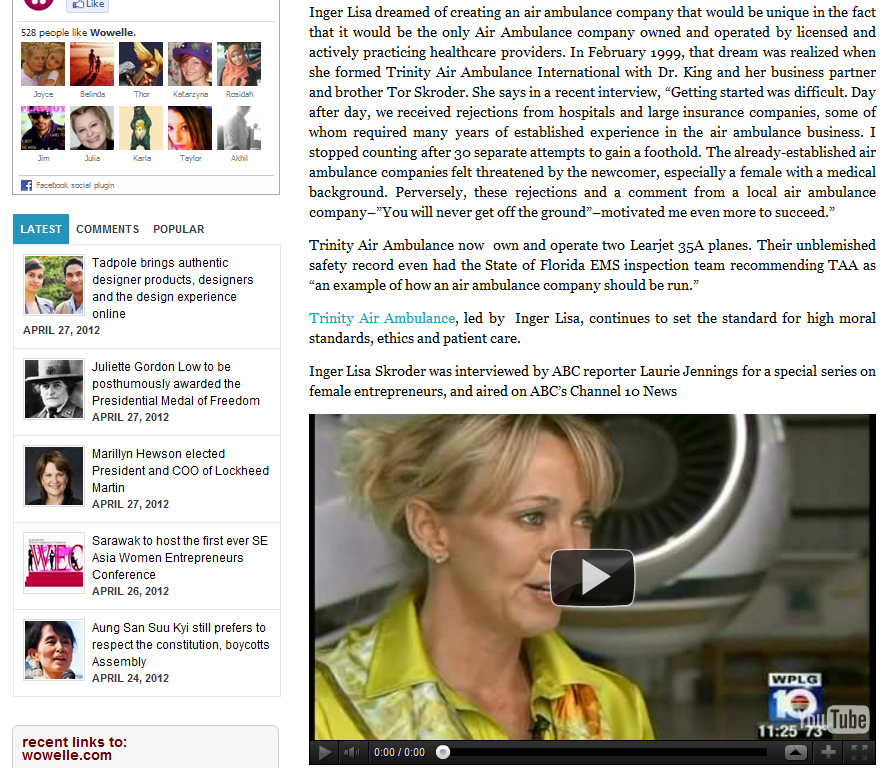 Lifesaving Care in the Air

At work while in her early 20s, Inger Lisa Skroder, MSN, ARNP, asked a coworker a question that changed her life.
“I asked him what he’d done over the weekend, and he said he went to England.”
Intrigued by the answer, Skroder, who’d recently moved from Vancouver to South Florida to work as a nurse, prompted him for more information. He explained that he, himself a healthcare professional, was assisting on an air transport.
The next day Skroder called his company, set up a job interview and in no time found herself flying medical missions around the world.
“I’ve just loved it,” she says.
That passion has become Skroder’s life work. In the past 20 years, Skroder has parlayed her passion to become a leader in South Florida’s fixed-wing ambulance industry. Incorporated by Skroder in 1999 and based in Lauderdale-By-The-Sea, Trinity Air Ambulance International not only holds the region’s best safety record, according to Skroder, but is the only such firm owned and operated by a nurse. The company is co-managed by Skroder’s brothers, Lars Skroder and Tor Skroder, who also is a nurse. With 12 full-time employees, 40 on-call staff members — including several part-time and per diem nurses and two planes. Trinity never has been involved in an accident or had an on-board death and touts the fastest response time among its competitors.
“We set the bar for the companies working alongside us,” Skroder says. “I’ve always thought, ‘Who better to own (an air-ambulance company) than someone in medicine?’ ”
The success Skroder has seen has not come easy. For nearly four years after incorporating Trinity, she worked three jobs to generate operating expenses and save for future growth.
One of her positions during that time was with American Airlines as the firm’s first in-house advanced practice nurse. At American, Skroder worked alongside company physicians in the employee health department providing occupational therapy to employees with on-the-job injuries.
In the wake of 9/11, Skroder lost her job with the airline, which, she says, was a blessing in disguise.
“It really made me concentrate on Trinity,” says Skroder, who began to win bids for organ transport from some of the region’s main medical centers.
To grow the business further, the business partners didn’t take salaries. The funds were funneled into the purchase of Trinity’s fleet instead. The first craft was purchased in 2004 and the second in 2009.
“To date, we do not have what most people would consider the ‘appropriate’ salary for the work we do,” Skroder says. “Basically everything has gone back into the business.”
The payoff comes in the form of doing something she always dreamed.
As a kid being raised on a Canadian farm with cows, chickens and pigs, she loved to watch shows like “M.A.S.H.” “I would think that looked cool or exciting.”
Skroder couldn’t have envisioned a more exhilarating career. Trinity aircraft operate mainly within the Caribbean but have traveled to Dubai, United Arab Emirates; Buenos Aires, Argentina; Santiago, Chile; Manila, Philippines and Barcelona, Spain; and have special permission to fly to mainland Cuba. She has helped save patients from earthquakes, accidents and even shark bites.
“We can usually be airborne faster than anyone in South Florida — 55 to 60 minutes compared to 90 minutes to three hours — maybe it’s because we’re the owners and also the healthcare providers so we understand the urgency.”
Skroder’s innovation in combining aviation with medicine has garnered attention beyond the medical institutions. Last September she was asked by the governor of Turks and Caicos — a small country in the lower chain of the Bahamas — to act as the country’s medical liaison and serve as the exclusive provider of air ambulance services.

Trinity Air Ambulance's medical team evacuated a Haitian Medical Doctor from Port-au-Prince, Haiti the day before his 56th birthday to Fort Lauderdale, Florida for medical treatment following the 7.0 earthquake.
A Haitian Medical Doctor injured in last Tuesday's earthquake in Port-au-Prince was flown via air ambulance to Fort Lauderdale, Florida for medical treatment. The Doctor was severely injured during the earthquake when the building he was in came down on top of him, puncturing a lung, fracturing ribs and partially paralyzing his left arm.
Trinity Air Ambulance's medical team accompanied Doctor Jean Duva out of Haiti on Saturday January 16th, after friends of the Doctor's from Norcross, Georgia contacted Trinity, a Fort Lauderdale based air medical services company. Trinity Air Ambulance coordinated the medical services and the admission to the treating facility in Fort Lauderdale, Florida. Trinity with Skylink Jets, the aircraft operator, preformed the first civilian air ambulance medevac out of Port au Prince, Haiti after the earthquake and completed 10 medical evacuations within the first 48 hours of the earthquake.
It turned out to be an early birthday gift for Doctor Duval as his birthday was on Sunday, January 17th. As of this writing the Doctor remains in stable and improving condition as reported by his family and friends. It will be a birthday that he will never forget.